Where is the relationship going

Not talking about a graph relationship. Continuing the discussion from Interesting from Apple’s earnings report:

After hosting providers, developers are next in line.

from the mouth of Stamplay's co-founder Giuliano Iacobelli is in line with @Torsten's comment. It is not all one-sided, as if you listen to some content, Stamplay was meant for developers. Will Claris use it to make our life easier or to make the customer's life easier: unclear at this point.

Anyone who wants to be more familiar with the DNA of Stamplay (now Claris Connect) should listen to the following content:

The conspiracy theorist in me says to watch it before the content gets pulled away.

I tagged this as 'devcon' because Stamplay's acquisition by Claris was a devcon announcement. Feel free to tag somehting else that is a better fit.

Basic stuff, you know, google / youtube with a company name or someone’s name can lead you to stuff people were not paying much attention to a few years back (or things that got the attention of a different crowd altogether).

It gets funny when you see politicians contradict themselves in two separate quotes (about 4 years apart usually, but some are narrowing things down recently, I guess that’s for a different discourse community altogether).

Interesting stuff. Do we have any timescales when this technology is likely to make an appearance in the FileMaker product - have they given any indications?

I don’t recall a specific date being mentioned, my bet would be first quarter of 2020, before the launch of the next release of the FileMaker product.

@Mark The product roadmap youtube video confirms the intent is to release Connect in the first quarter of 2020. ETS is already ongoing.

All this subject to the following disclaimer: 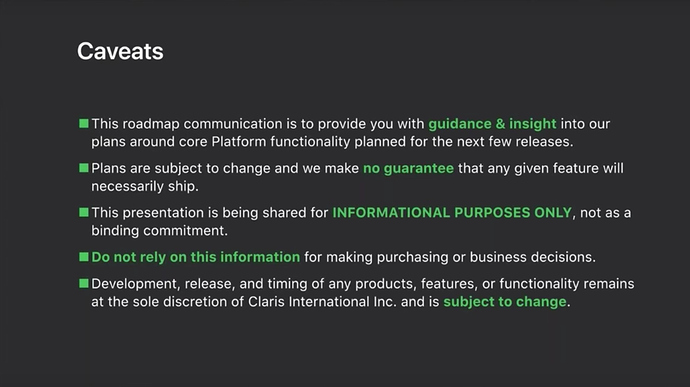 @Mark Also, the CEO Letter (strange that a letter has no date), mentions this on the same topic:

In January, we will launch Claris Connect for workflow automation. In May, we will launch the next major release of Claris FileMaker with lightweight web authoring. From there we will continue to release new features on a much more frequent cadence.

this could only be accomplished IMHO if quality increases tremendously. Historically new features had to be handled carefully and never ready from primetime until months of bug reporting - defending and convincing to get fixed. Some users got burned when they hit update on FMcloud and lost access for days. Good luck!

That’s a good point. I think(know) there’s a flip side to this too, though. On a yearly release cycle, if you don’t have your feature ready for release, you’re faced with the prospect of having to wait a whole year before you can get it in the product, and maybe it won’t even be as exciting or relevant at that point. Therefore there is enormous pressure to rush-deliver features in a yearly cycle.

A quarterly release cycle reduces pressure to get features into the product because the feature can just be released three months later if it wasn’t perfect yet.

Understood. By quality I meant preventing new versions with bugs like erasing fonts, scriptsteps, value lists or entire file corruption or being locked out just by hitting update button. All well reported since cycle switched to annual releasing…